The Astrology of the Boeing Max 8 737 Crashes

I looked at the charts for these horrifying events recently. I was looking for a pattern that might help us understand when we might get some justice and accountability and assurances of safety.

Of all the planets, Jupiter and Mercury, and the signs they rule (Sagittarius, Gemini and Virgo) rule aviation. Jupiter is the big picture of aviation and the narrative it plays in the US national self-image (we are the pioneers in this industry); Mercury is daily travel aviation. Just looking at how these planets were engaged at the time of the crashes might help point to a time in the future when they will meet again, possibly then giving us some resolution and improved consumer protections.

Jupiter and Mercury were conjunct (that is, in the same place) during the Lion Air Crash; in the sign of Scorpio (secrets and hidden truths). Now 6 months later Jupiter has moved into the sign of Sagittarius (growth, expansion, aviation) and at the time of the Ethiopian Airlines crash in March, Jupiter was being squared (challenged) by a retrograde moving Mercury; with this tragedy, there were 2 crashes of Max 8 737s, and the review and re-assessment (mercury retrograde) began, connecting the past with the present. Mercury was in compassionate Pisces–and many of the dead in Ethiopia were humanitarian aid workers.

Looking ahead for action on this matter: Mercury forms it’s next strong, aviation related angle to Jupiter the end of May, 2019; this will be an opposition, strongly impacting the 1958 Federal Aviation Administration chart. Hearings and information are likely on the matter at this time. Mercury will form another square to Jupiter early September, in tech loving Virgo, and many of the of the other planets will be in Virgo at the same time, this is the closing square in the Mercury/Jupiter cycle: the role of software in aviation and specifically these accidents will be in the news. I would expect to see some formal, government-related resolution or response  (not saying we will like it)  the first week of January 2020. Why? At the top of this story, I pointed out that Jupiter and Mercury were at the same place in the sky at the time of the Lion Crash; these planets assume the same position in January 2020, though this time not in the secretive sign of Scorpio but in the sign of the CEO and the government: Capricorn.

One thing that really struck me about both charts is that both events happened with slow moving Uranus at zero degrees of Taurus–this degree is rarely traveled for any length of time. Zero represents the beginning, what’s new and uncharted and is always something we haven’t seen before. Uranus was at zero degrees very briefly May 2019, late October/early November 2019 and 2 weeks in March 2019. It is very potent, zero, and represents something very new. Uranus is technology and radical change. Taurus is what we value–usually money. With both crashes happening at 0 degrees, this signals something very new that is beginning. What I want to know is, what Super Max 737 event occurred in mid-May 2018. Something must have happened. A 737 went down in Cuba at the time, but that wasn’t a SuperMax. I’m waiting to find out what gets revealed as the investigation of these disasters continues.

Uranus does not return to 0 degrees of Taurus for another 84 years. When Jupiter/Mercury meet in January 2020, Uranus will be at 2 degrees; not zero, but close, and it will be stationing to go retrograde at the time and for the first time since the tragedies, it will form a strong angle to Jupiter/Mercury. So, to review:

In the Lion Air Crash chart, Jupiter and Mercury are conjunct (that is, at the same place) in Scorpio, no angle to Uranus in Taurus: 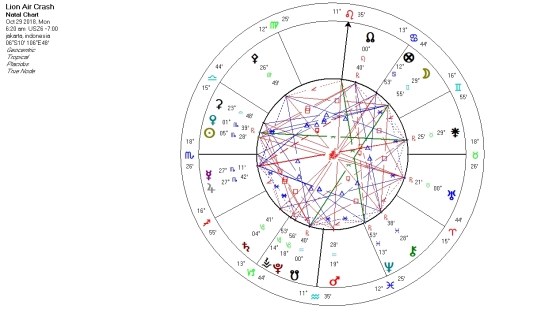 In the Ethiopian Airlines crash, Jupiter and Mercury are square; no strong connection to Uranus: 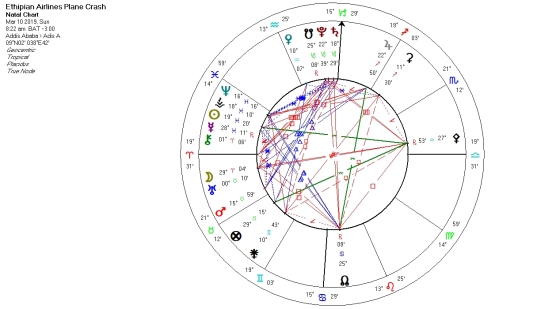 And here, looking ahead to January 2020; this chart speaks to big changes in our government/structures in general. Specifically, though, Jupiter and Mercury meet for the first time around this date since the Lion Air Crash. And both planets, unlike the times of the crashes, are in a tight aspect to Uranus.